SECHSKIES, who debuted in 1997, is making a comeback with the new concert. SECHSKIES, which translates to six crystals. The boys became one of the pioneers of K-pop idol groups. Originally composed of six members, the group gained success upon their debut. Their popularity, however, only lasted three years, as the group disbanded in 2000. Their much-anticipated reunion happened in 2016 during season 2 of Infinite Challenge’s “Saturday, Saturday is for Singers” (토토가 – TotoGa) special. They signed together as a five-member group under YG Entertainment that same year, and have since released three albums: 2016 Re-Album, The 20th Anniversary, and Another Light (both in 2017). So Channel-Korea will tell you all the information about the concert, check it out!

On April 23, YG Entertainment revealed the poster for the SECHSKIES exhibition, “YELLOW UNIVERSE” on their official blog. This exhibition was included in the previously released teaser poster announcing the group’s 20th anniversary project.

The poster features the exhibition’s exterior in an abstract composition. SECHSKIES member Lee Jae Jin provided input in the creation of this symbolic image.

SECHSKIES’s new album, “THE 20TH ANNIVERSARY,” will be released on April 28, and the exhibition will open on the same day. The exhibition is scheduled to be held for one month, ending on May 28.

The album and exhibition are only the start of SECHSKIES’s special 20th anniversary project plans. The group also plans to hold a fan meeting, concert, and more.

The concert begins exactly at 6 pm with a VCR. It started with song from their fifth album.

The second song they sang is the legendary song Three Words, where they were seated on a revolving platform. Everyone was into it and shouting loudly, Now, Here, Us! 👩‍🎤Everything was so magical. Two songs dedicated for Yellowkies for the opening is really daebak.💃🏻

After that song, there was a greeting and they talked to the fans

They performed during the 20th anniversary concert in Seoul. This time they made it more unique.They sang the sexy Heartbreak song 2016 version. This song, though it’s about a breakup, still gives everyone a very good feeling. It’s one of my favorite songs of theirs. This is the most sexy song for me, forgetting the meaning of the lyrics.

They sang Remember Me while on a bed hanging on air. They were so stunning, and their performance level was as excellent as always, despite the fear.

They performed Smile, as well, which is my favorite song in their fifth album.

This song is a representative song that proves that they can all sing and hit those notes.

They also performed Letting You Go.With all the ballad songs that they sang, The fans were happy and satisfied that, for this concert, they gave vocal parts to Jae Duck. If you watch their performance, you will always thankful, grateful, and happy whenever Jae Duck sings the vocal lines. It is actually a rare moment outside the concert stage. He is more known to be the great dancer and rapper. But during the concert, he proved that he deserved vocal lines, too. Hopefully, on their next album he will be given more lines.

They sang Need You in an interactive fun video. The people who watched were so lucky to experience this concept type of concert.

After that song, Sechskies asked the audience to bring out their phones and capture every moment with them.

The next song was Drinking Problem.

Getting back to the main stage, they next sang Yegam.

A few minutes later, after another break, the third part of the concert started. They changed their outfits for the new section of the show.

They first sang Something Special, and fan chants never failed! The audience stood up and all sang together, while hammering their light sticks. The next song was Got A Feeling, and fans jived with Sechskies.

After exhausting, yet amazing dance performances, they took a small talk break with the fans.

Then they sang Be Well, concluding the third part of the concert.💓💓💓

After that, it was time for the finale. Each of them gave their final words for the fans. They thanked everyone who came to the concert. They also looked at the digital clock on the second floor, saying that the concert had gone too fast.

Finally, they introduced their last song, Together Forever. 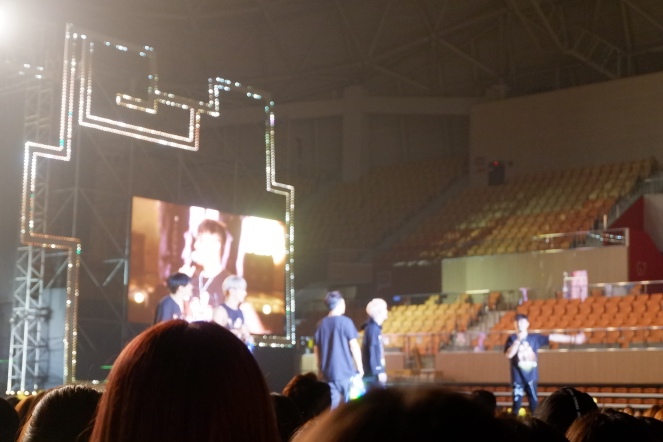 They sang a total of 19 songs, including the dance remix combined as one. It was a fun-filled and exciting interactive concert with the fans!

For the merchandise you could buy and see in the booth when you went to the concert or in their official website, here it is:

Sechs Kies: One of K-pop’s super comebacks! Korea’s legendary boy-band, Sechs Kies, has made one of the biggest comebacks in K-pop’s history! Considered as one of the first-generation K-pop groups, which disbanded in 2000, Sechs Kies reunited in 2016 sending fans into a frenzy! Their 2016 comeback concert was called “Yellow Note”, and it certainly changed the color of the K-wave once again. More than 20,000 fans sold out the concert series, setting in stone that the Sechs Kies were loved and enormously missed. They are the base of what K-Pop is nowadays, with their crazy beats, catchy raps, and fun dance moves, Sechs Kies are the real deal.

In every show there are always facts that all the fans need to know.

That’s all about the last concert. They just confirmed they will be holding a concert in 2020, but we will see what comes up. If find out more about them, we will tell you all the details.

So, that’s it for today. Do you want to know more about what’s happening with your favorite K-pop idol? Channel-Korea will tell you all about it, just stay tuned and keep reading. Don’t forget to write down your comments below, and see you for the next article.

K-Drama Review: ‘Baek Hee Has Returned’ is About a Family Surrounded by Misunderstandings Mixed...